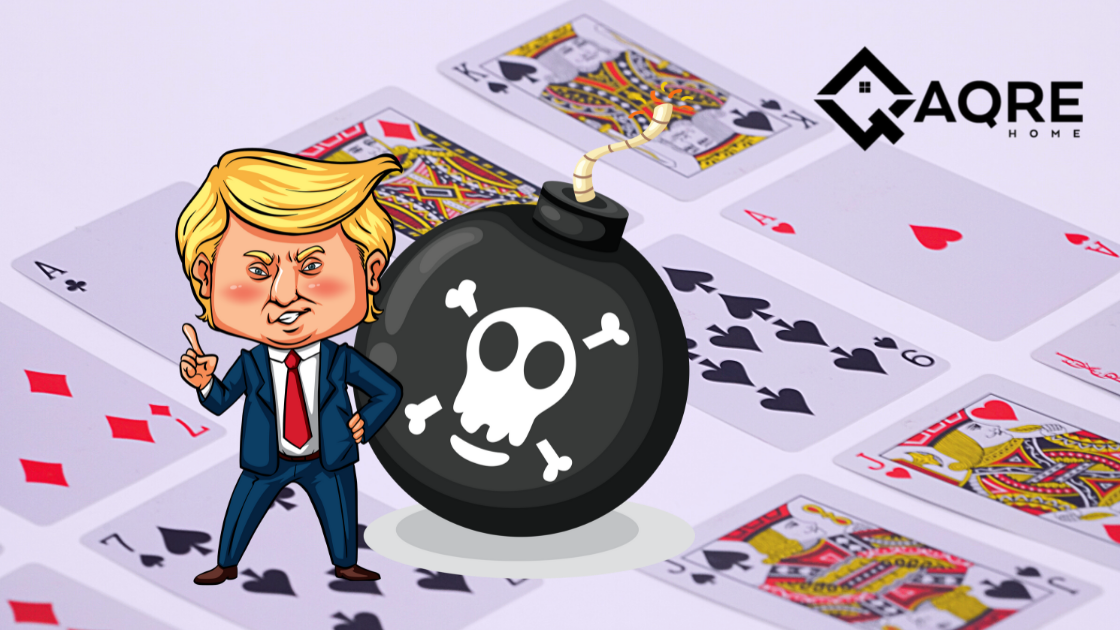 Donald Trump’s Real Estate Failures (and the Reasons Behind Them!)

Trump grew his wealth to $4 billion… but along the way, there were a lot of Donald Trump real estate failures! Learn what mistakes to avoid in this Donald Trump Series: Part #2.

In our first article on the Donald Trump Real Estate Investment Strategy, you saw how he built his immense fortune using various fair and unfair (but legal!) over the past 40 years.

He relied on his father to deal out heavy loans for him… and used his business and political connections.

But above all, he used ‘exaggeration’ to make himself a BRAND!

Now, he sure did make a lot of money, but the four Atlantic City bankruptcy cases in his closet will haunt him to the grave.

When asked, he says the bankruptcies didn’t ‘hit him hard,’ and he got out just in the nick of time.

But if it was us, these real estate failures would have hit us hard…

Read on to learn all about the Donald Trump real estate failures to make up your mind, and learn how to avoid them yourself!

Yes, as you just learned, even the best in the game have their grand failures, so without further ado, let’s have a look at Trump’s…

Just as gambling was made legal in Atlantic City, New Jersey, in the 1980s, Trump snapped the opportunity and began building his 1 billion dollar casino: Trump Taj Mahal.

It was planned to be the biggest casino in Atlantic City and Trump hyped it into something Out Of This World.

Guess what? Within a year, the casino was $3 billion in the red.

He was forced to give up half of his holdings in the property after filing for chapter 11.

Trump went to court and filed for bankruptcy protection once again…

This time, he gave up 49% of his stake in the company and handed over the Trump Shuttle to his creditors, narrowly escaping going broke personally.

Eventually, Trump disposed of the Plaza Hotel in 1995.

Mr. Trump rushed back to the courts in 2004 to file protection against bankruptcy for the company that held his three Atlantic City casinos and a riverboat.

The company had run up $1.8 billion in debt.

Again, the company was restructured, shed debts (about $500 million) on court orders, and Trump gave up part of his stake.

But still… he retained control over the casinos.

The last nail in the coffin of Trump’s casino holdings was the 2008 financial crisis – the Great Recession.

So, when over a $53 million payment was missed in 2009, Trump took another trip through chapter 11…

This time, he was made to resign as chairman, and his partner Carl Icahn took over.

That was Donald Trump’s last bankruptcy filing. After that, his career in the casino business pretty much winded down.

And, that’s the story of the dramatic downfall of the Trump casino empire!

Now, let’s go through the REASONS why the embarrassing (he’s not embarrassed, though) Donald Trump real estate failures came about.

And hopefully learn some lessons so we can avoid his epic mistakes!

Though an amazing businessman, it is a fact that Trump’s failures could be avoided if he took some precautions.

And yes, that means even millionaires have character flaws that cost them a hefty sum!

At numerous times, Donald Trump has admitted that he has a hard time focusing on a business’s growth once he has acquired it.

In his own words, you buy it, and “… then you tend to take your eye off the ball.”

So ‘lack of focus’ has been his problem.

He loves the deal-making part of real estate investing, but not the day-to-day management that is necessary after the deal is done.

What he enjoys the most is the run to get his hands on a property or company.

Once he has it, he lacks the determination to push his investment to grow.

Take that as a cautionary tale!

Failure Lesson 1: Don’t tap out the second you find a great deal, assuming it will grow itself.

Real estate success is about finding great investments… but the day-to-day activities of running them are just as important!

As we talked about in our first article on Trump’s real estate strategy, one of the keys to his success was his use of OPM (Other People’s Money).

This was his greatest strength…

But when overused, eventually it because a weakness.

The Trump empire was destined to meet disaster since its very base was debt.

Lucky Trump always got away with so much debt on his shoulders, sometimes with the help of his father and sometimes by ‘using’ the law – which he brags about publicly.

With his power of exceptional speaking skills…

Trump was able to convince the banks and his small-scale investors to finance his ideas again and again (FOUR times – Gosh! how blind were they?).

With so many debts to pay, one missing payment could send the whole thing crumbling down… and that’s exactly what happened!

Since his businesses had so little of his own money though, Trump never ended up being broke himself!

How’s that for a good real estate investment strategy?

But still, when using OPM, be careful not to overextend yourself like Trump.

Trump self-praises that he got out of Atlantic City at just the right time and that his excellent timing allowed him to bag riches for himself.

He has never apologized to the thousands of his unpaid employees, financers, and creditors who wrote off losses for him year after year…

Handing out and losing more money each time.

So, it’s pretty evident that Trump’s business journey wasn’t a team effort at all.

He was there for himself ONLY.

He ditched his partners and got out when it was time for the Great Recession bomb to explode.

With this self-centered mindset, Trump was never in it for the long haul. He was never going to make long-term success – and he kind of knew it.

After all, his never-ending grifts and blarney ever bear lasting fruits – could they?

Fast-forward to the Present

Recently, for the first time in 25 years, Trump couldn’t find a spot in the Forbes list of 400 wealthiest Americans.

And that’s mainly due to Covid-19, plus Trump’s fall as the US President.

Also, there are reports that the Ex. President’s millions of dollars worth of debts are falling due soon!

Will he be able to get away this time?

With all the record financial losses, loss of the presidency, loss of creditworthiness, and public trust combined, this time, Trump seems to be landing in hot water.

But you can’t be sure, really. Only time will tell!

But while it’s too soon to judge the full effect of this debt on Trump, I’m sure you wouldn’t want to find yourself in the same situation… right?

So, what’s the takeaway for you from the Donald Trump real estate failures?

Let us know in the comments!

And visit our AQRE Home blog if you want to learn more tips about real estate investing from our team of experts.

Types of Investments in Real Estate

From building a nest egg for retirement to generating more income on a daily basis, there are many reasons people look toward city real estate for a secure investment. If you’re looking to put your money into the property market, you have several options. Below we’ve outline three types of property investing depending on your […]

6 Tips for a Successful Open House

Not all homeowners approve of the idea of open houses, which literally means: so many strangers taking a look around your home. But then there are those who do see value in hosting open houses. If you belong to the second category (and are about to sell your home) you’re going to need to read […]

5 Steps to Choosing the Right Movers

Moving the entire household can be pretty daunting for homeowners relocating. That’s because for most people packing and unpacking is already over-the-top work and worry, let alone the moving part itself. Plus there’s always the fear of losing valuable stuff during a move or damages to the property. That’s why experts recommend professional movers instead […]

Real Estate Investment: Three Telltale Signs You’re Not Cut Out to Be a Landlord

The idea of purchasing a property and having renters can be an exciting business venture that offers lucrative financial rewards. However, there’s a lot involved in being a successful landlord and it’s important to be aware of what’s required before making the commitment. Whether you’re investing in one rental property or five, here are some […]

Reality TV shows have energized everyday people to dive into the real estate market and make money flipping houses. The dramatic presentation and profitable end results make the industry seem like a sure thing. But house-flipping, like any industry, has its share of challenges. Television often props up ratings by showing industry pros overcoming adversity […]

Growing Your Wealth: 3 Reasons Why Real Estate Is the Ultimate Long-Term Investment

Many people may be hesitant to invest in real estate long-term investment. However, owning property has a steady historical track record and isn’t as volatile as other investment markets can be. Any investor who hasn’t seriously considered it as an option should take a closer look at the benefits of owning real estate and why […]

If you’ve been thinking about investing in a real estate project you may have considered buying a distressed house or two at a steep discount in order to fix them up and sell them at a higher price. This is known as “flipping”, and in today’s post, we’ll share a quick guide to flipping homes […]

The Ideal Investment Property: What Features Should You Be Looking for the First Time Around

Thinking About Buying an Investment Property? 6 Tips to Ensure You Don’t Get Fleeced

Buying a property is one of the biggest decisions that you’ll ever have to make as an investor. As such, it’s a necessity to make your decisions with only the most careful of consideration. Here are the six tips that you need to heed in order to ensure that you don’t get fleeced.  Find The […]