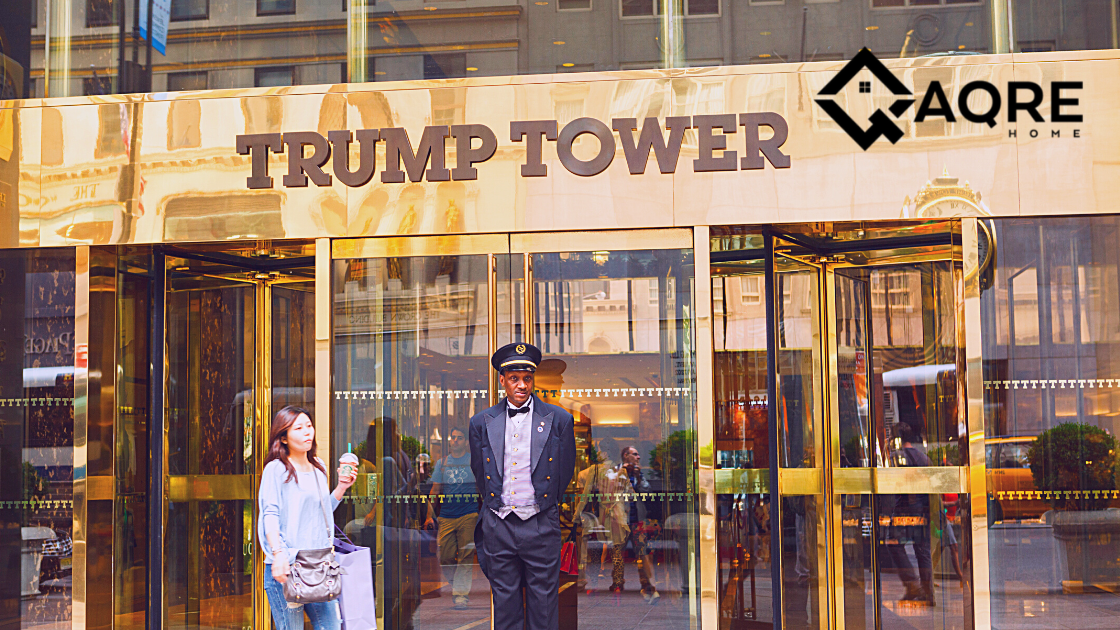 Ever wonder how The Donald grew his wealth to $4 billion? Read on to learn all the secrets of the Donald Trump Real Estate Investment Strategy, in this Donald Trump Series: Part #1.

Donald Trump, the 45th president of the United States, has been out of the public eye since he lost his presidential seat to Joe Biden in the 2020 election.

To many, Trump’s presidency was a mess of controversies…

But while he may not have been a ‘great’ president, his business life can surely be a lesson (or at least a fun read!) for aspiring real estate investors.

That’s because, with an estimated net worth of 2.5 billion USD, Trump has made it to where many of us would only dream of reaching with our real estate strategy.

So, politics aside, would you like to know the “Donald Trump Real Estate Investment Strategy”?

I promise it won’t disappoint!

It All Started with a “Small” Loan (Of A Million Dollars)

Yes, he has real estate and general business acumen in abundance…

But he never started off from zero.

He got a “small” loan of $1 million from his dad, Fred Trump, a real estate tycoon himself, to begin his career.

At the age of 25, Donald Trump was put in charge of the family business, which he renamed “The Trump Organization.”

Trump shifted the business’s focus from middle-class housing projects in Queens and Brooklyn to high-end, luxury real estate in the more upscale areas of NYC.

Since then, he’s been extremely successful (though not always, yikes).

He developed upscale buildings all over the world, including Grand Hyatt, the Plaza Hotel, and numerous Trump Towers.

So what has been the Donald Trump real estate investment strategy for success?

He Has Thrived on Other People’s Money!

Unlike most entrepreneurs, Donald Trump had the advantage of having a rich and influential father.

And, Trump very often cashed in on that…

The single biggest Donald Trump real estate investment strategy has been to use other people’s money (OPM) to develop his empire.

And, since his rich dad had his back, Trump could get lots of money easily, mostly as massive loans from banks and other rich investors.

The banking and political connections of the Trump family also played a huge role in helping the younger Trump climb up the ladder.

So, what can you learn from this, even if your father isn’t a real estate tycoon?

The biggest lesson of the Donald Trump real estate investment strategy is Other People’s Money (OPM).

Even if you aren’t rich, you can still use bank loans, partner with experienced investors, and start building a network of support to rely on for your investments.

And it’s never too early to start!

And whatever you think about Trump, that clearly shows real hard work and smart thinking behind the scenes.

How did he achieve that? Through the second Donald Trump real estate investment strategy: branding.

Trump is a big-time HYPE creator! He’s admitted to it many times, saying that he uses ‘exaggeration’ to sell himself.

The man has openly used his TV fame, and later his presidency, to leverage his real estate business.

So much of his fortune today comes from his brand name only, Trump this, Trump that, you know…

Many businesses that have no connection to Donald Trump still jump at the chance to use the ‘Trump’ tag with his license, for example, the Trump Ocean Club, Trump Fine Foods, etc.

So what can you learn from this as an aspiring real estate investor?

Brand yourself well, and make your presence known in your area!

Donald Trump also has the skill of leaving a lasting impression on people’s minds.

He’s a good talker, a fine marketer, and an excellent negotiator.

He has the reputation of a straight-talker from his TV series The Apprentice, in which he came across as a ‘no-nonsense’ sort of negotiator.

One great example of his negotiation power is when he won over NYC to give one of his hotels a 40-year tax break.

He saved 160 million USD on that property!

Negotiating is a crucial skill to building personal wealth in any job or industry.

So, if you want to succeed, join a negotiating class, or start negotiating for yourself in daily life to develop your skill.

It will start small, but you can also become a master negotiator and a master at selling yourself in time!

He’s Penny-Wise But Not Pound Foolish

Trump has described himself as someone who ‘fights like hell to pay as little as possible.’

And, that is very true.

Donald Trump, just like his dad, seems to hold money in the highest regard.

Fred Trump was known to go under budget on government projects and pocket the difference as profit for himself.

He was questioned about it many times, but never got caught though…

Also, senior Trump had the habit of getting around tax laws, which junior Trump picked too.

So, what is the lesson for an aspiring real estate investor?

Do your research into all the potential loopholes that exist in your favor, and use them to grow your real estate wealth.

From tax breaks to grants, to items you can write off as business expenses…

The list is endless, and well worth your time spent looking into it.

Donald Trump has been accused of having evaded tax multiple times.

And, that goes to show how sharp and shrewd accounting can help real estate investors save huge amounts of money.

Accountants who can make (as if with a magic wand) millions of dollars of Trump’s operating income to appear as just a few thousand on paper.

Tim O’Brien, an American journalist, points out that this art of avoiding taxes runs in the Trump family.

He said when Fred Trump passed part of his wealth to his children, he missed inheritance taxes of about $500 million easily.

And, that’s exactly how Donald Trump likes to play the game too.

So, Is Trump a Real Estate Mogul?

Donald J. Trump does not make it to the top 10 lists of the New York City property developers.

But, with a fleet of NY skyscrapers, golf courses, deluxe towers, shopping plazas, and much more in his name, Donald Trump IS a real estate mogul.

He has accumulated enormous wealth in the past 40 years, and he’s definitely a BIG FISH in American real estate.

However, he’s not infallible!

Trump has also made some terrible mistakes in his business career, including his much-talked-about flop: the downfall of his hotel and casino empire.

Would you like to know (& be warned of) the “Donald Trump Real Estate Failures“?

That’s great! Then read the second part of our Donald Trump Series!

And if you want to read more articles for young real estate investors, check out our AQRE Home blog!

Why Location Matters So Much When Buying A Home

Read to find out why they say ‘location, location, location’ when asked about the top thing to look for in a real estate property! And learn why location matters so much when buying a home.   “You can upgrade your house, but you can’t upgrade your location.” It’s true, right? As you’re on the hunt […]

As an agent or house seller, promoting your listings online is the number one skill you need to win this year. See these 6 steps to effectively listing a house online to become the industry expert.   There are thousands of property listings in the United States every month. Just last year around 5.6 MILLION […]

2022 Real Estate Trends: What You Need to Know

Wow, 2021 was a wild year. With a lot that took place throughout the country, you are probably wondering how it will affect 2022 real estate trends. Read on to find out!   While the pandemic has continued to disrupt the economy (and all we seem to be hearing about are the variants), the real […]

A Christmas Real Estate Marketing Strategy: End The Year On A High

The holiday season is a great time to build lasting relationships with your clients and form new ones. Make the most of this moment with an exciting Christmas real estate marketing strategy that targets everyone on your list – so you can start the New Year strong.   With the busy summer season coming to […]

Is it Tenants Responsibility to Maintain Garden of a Rental Property?

A rental property is both an investment, and a home… so is it tenants responsibility to maintain garden, or is it the landlord’s? Some tenants love to garden and are more than willing to do yard work on their rented properties, but not others! This can lead to a predicament where tenants and landlords don’t […]

9 Common Tenant Complaints and How to Solve Them: The Ultimate Guide

Every landlord has some complaints from tenants. In this article, we will go over the most common tenant complaints and how you can solve them.   All business owners know that if you want to stay in business, then you must take care of your customers. Well, as a landlord, your customers are your tenants. […]

How To Save On Property Taxes This Year

What Power Does a HOA Have, Really? HOA 101 Tips

Here are some HOA tips to help you navigate your Homeowner Association and understand, what power does a HOA have over you and your home?   When you purchase a home, one of the first things you need to do is join the Homeowner Association (HOA). HOAs exist in order to manage and maintain common […]

How to Evict a Tenant in 7 Easy Steps

Want to evict a tenant who is causing problems? This article will teach you how to evict a tenant in 7 easy steps.   If you are reading this blog, it’s probably because you want to get rid of the bad tenant living on your property. The good news is that there are many legal […]

Should You Get a Home Inspection Before Listing? Let’s Find Out…

Are you thinking of selling your home? If yes, then a pre-listing inspection is probably on your mind. So, should you get one? Let’s take a look…   As experienced home sellers will know, there are many rites of passage to do before listing your property. Things like finding a real estate agent (which 90% […]