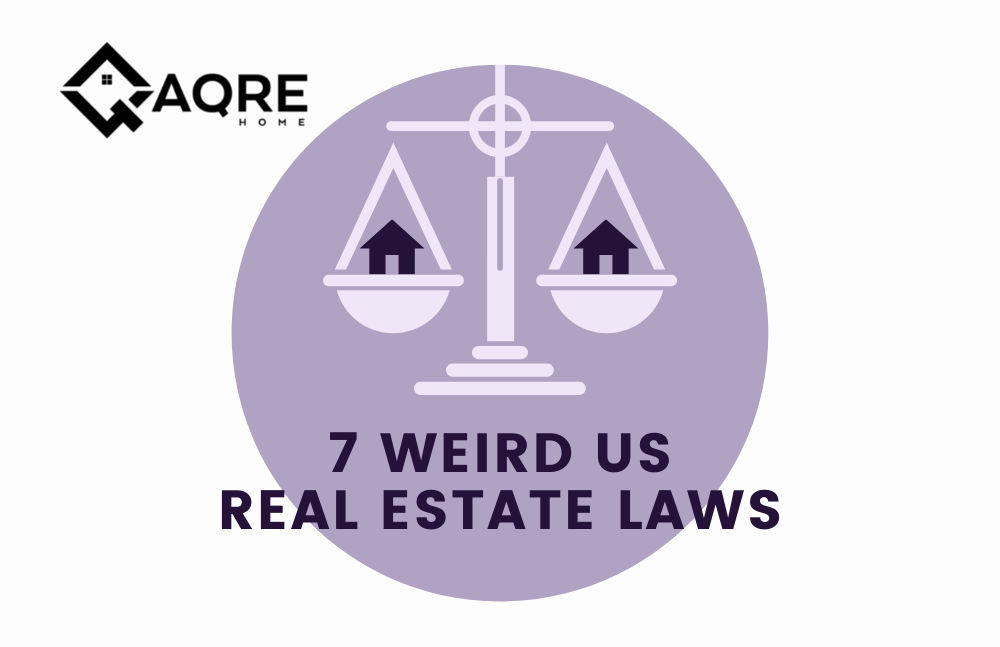 The world of real estate can get pretty bizarre at times… Read on about the weirdest Real Estate Laws in the United States today!

Laws are made to improve people’s lives and ensure better co-existence in society. That’s their essential purpose.

You can’t really imagine a moral society existing without laws, can you?

Because until and unless there’s some arm-twisting, well, let’s say it…

So, laws are important for social harmony.

But in ensuring harmony, lawmaking can go overboard and get pretty weird (and ridiculous) too.

Some of these ridiculous laws don’t even pass the commonsense litmus test but they are there… And for a reason!

Do you want to take a ride through some of the weirdest laws in the US real estate industry?

Law: No more than five females can live together in the same house

If you’re living in Arkansas bear in mind that you can’t cohabit with five other women under the same roof, in the same house.

As weird as it may sound, there’s an old reason behind this law.

Years ago, many states in the US were trying to curb the brothels and prostitution business around the country…

This law was supposed to help the government crackdown on the brothels since they would have a large number of women living together.

Law: No residential fence over 6 ft.

Well, you can’t do that in Rhode Island!

Because a wall taller than 6 feet might obstruct your neighbor’s view (and that’s pretty understandable, no?)

Imagine a household hated by both the neighbors on each side and they both erected a wall squeezing the mutually hated neighbor in between.

That would be unfair to them and lower the value of their home, wouldn’t it?

Law: No more than two toilets per house

That law came on the books because the public wanted it that way.

See… Waldron is a small island between Canada and Washington State and it has a tiny population.

Because very few families will move to a place (and buy a house) where they can’t have more than two bathrooms in their house.

That was the logic, anyway.

Law: Squatters can legally own their occupied property

‘What did I just read?’  You thought that, didn’t you?

As it seems, the law is obviously strange and can provide the habitual squatters with an open opportunity to occupy any abandoned property and within years become its legal owner…

But that’s not so easy, you see.

The squatter can only claim the ownership if they’ve lived there for five years and acted as the real owners would.

Meaning, they paid the taxes, HOA dues, and took care of all the other home maintenance as the original owner would.

You’d be better off renting it out before you find yourself filing for the repossession of your property – now in the hands of some squatter!

Law: Any improvements or accessories shown to buyers become their property after the sale

Any and all objects — including shelving, family photos hanging on the wall, the outdoor BBQ, the flower pots you put on the windowsill, fake fire pit logs, and above-ground pools — are fair game.

If you’re selling real estate in Texas, you’d better get your pen ready. You’ve got a lot of excluding to do in the contract…

Because it’s not fun to have your priceless wall art or heirloom curtain rods taken from you in a silly lawsuit because you thought they’d add a little flair to your open house.

Law: No burglar bars outside your windows

Yeah, that’s the way it is in Ridgeland…

You’re not allowed to put burglar bars outside your home windows.

The act was passed in 1996 and one of the main reasons was that having burglar bars on the windows stripped houses of their beauty.

And with the high-end security systems of the modern world, who still uses burglar bars now, anyway?

Law: No DIY on a Sunday

If you want to live in any of the above-mentioned states, know that you won’t be allowed to do any Do-it-Yourself painting, hammering, drilling, or mowing on a Sunday (especially the morning).

Because all the DIYing causes noise and disturbance to the neighbors enjoying their quiet Sunday.

(Ok, drilling and mowing we understand… but painting??)

So, if you’re a DIY person in NY, NJ, or New Mexico you’d need to act fast on Saturday to complete any home maintenance jobs.

*There are other US states with similar laws, so be aware of what the law holds for your state!

Beware of the Crazy Laws In Your State!

Even if you’re not from one of the above states, keep in mind that your particular state might have such odd laws too.

Before you move your family to any state – check with an expert for any such laws.

Because you’d SURELY not want to get into a legal battle just for ‘having a nap on an upholstered sofa on your porch.’

Yeah, that’s against the law somewhere in the United States, too.

Yeah, that’s Colorado, for sure! (Boulder, Colorado to be exact)

But when you do make the choice of where you want to settle down, make your home search easy and do it all online with the help of AQRE Home.

View our Properties for sale or rent right now in your area, and reach out to our team day or night at +1 (844) 424-AQRE (2773) or info@aqrehome.com to answer any of your home buying, selling, or renting questions.

Types of Investments in Real Estate

From building a nest egg for retirement to generating more income on a daily basis, there are many reasons people look toward city real estate for a secure investment. If you’re looking to put your money into the property market, you have several options. Below we’ve outline three types of property investing depending on your […]

6 Tips for a Successful Open House

Not all homeowners approve of the idea of open houses, which literally means: so many strangers taking a look around your home. But then there are those who do see value in hosting open houses. If you belong to the second category (and are about to sell your home) you’re going to need to read […]

5 Steps to Choosing the Right Movers

Moving the entire household can be pretty daunting for homeowners relocating. That’s because for most people packing and unpacking is already over-the-top work and worry, let alone the moving part itself. Plus there’s always the fear of losing valuable stuff during a move or damages to the property. That’s why experts recommend professional movers instead […]

Reality TV shows have energized everyday people to dive into the real estate market and make money flipping houses. The dramatic presentation and profitable end results make the industry seem like a sure thing. But house-flipping, like any industry, has its share of challenges. Television often props up ratings by showing industry pros overcoming adversity […]

Growing Your Wealth: 3 Reasons Why Real Estate Is the Ultimate Long-Term Investment

Many people may be hesitant to invest in real estate long-term investment. However, owning property has a steady historical track record and isn’t as volatile as other investment markets can be. Any investor who hasn’t seriously considered it as an option should take a closer look at the benefits of owning real estate and why […]

If you’ve been thinking about investing in a real estate project you may have considered buying a distressed house or two at a steep discount in order to fix them up and sell them at a higher price. This is known as “flipping”, and in today’s post, we’ll share a quick guide to flipping homes […]

The Ideal Investment Property: What Features Should You Be Looking for the First Time Around

Thinking About Buying an Investment Property? 6 Tips to Ensure You Don’t Get Fleeced

Buying a property is one of the biggest decisions that you’ll ever have to make as an investor. As such, it’s a necessity to make your decisions with only the most careful of consideration. Here are the six tips that you need to heed in order to ensure that you don’t get fleeced.  Find The […]

Is There a Right Time to Buy a House?

House hunting can go one of two ways, you could be lucky and find your dream home right away or it could take you months of searching to find something you’re willing to spend your hard-earned and hard saved money on.  Deciding if now is the right time to buy a house becomes even hard […]